Yes, Ireland does have droughts: Notes from the 9th ACRE Workshop

Note: This page was originally sourced from our Blogger page: http://ncarrda.blogspot.com/2016/08/yes-ireland-does-have-droughts-notes.html

The RDA hosts many climate reanalysis collections, yet only two in our archive are unique in that they extend beyond the modern (post-1948) radiosonde era: the NOAA-CIRES 20th Century Reanalysis (1851–2014; 20CR) and the ERA-20C (1900–2010) produced under ECMWF's ERA-CLIM project.  In order to produce a climate reconstruction dating back over a century, both of these reanalyses rely on assimilating very old surface and marine weather observations, which have been assembled into long-term observational datasets such as the International Surface Pressure Databank (ISPD) and the International Comprehensive Ocean-Atmosphere Dataset (ICOADS).  How do these historic observations find their way into a modern climate reconstruction such as 20CR and ERA-20C?

It all starts with the Atmospheric Circulation Reconstructions over the Earth (ACRE) initiative, which is an international collaboration between meteorological organizations, atmospheric scientists, librarians, and volunteers who are dedicated to the recovery and digitization of historic global weather observations.  By facilitating the process of rescuing, digitizing, and performing quality control of data from old weather log books, ACRE ensures that these important observations provide a better understanding of past climate, which in turn aids in modern climate applications and studies of climate impacts.


ACRE holds annual workshops to discuss all things related to data rescue, and I attended the 9th ACRE Workshop and Historical Weather and Climate Data Forum, held June 20-24 at Maynooth University in Ireland.  The meeting agenda was populated with talks illustrating the full cycle of how historic data observations make their way from being discovered and digitized all the way to being assimilated into climate reconstructions and applications.

Most notably, the annual ACRE workshop is held in different locations around the world, and the local ACRE partners which host the workshop are featured prominently in the meeting agenda.  This not only brings attention to data rescue efforts in the region which hosts the workshop and encourages local groups to become more involved, but it also highlights the importance of how data rescue facilitated by ACRE leads to a better understanding of the past local climate and subsequent future impacts.  At the most recent meeting in June, climate scientists from Maynooth University and Met Éireann, the Irish national weather service, gave illuminating talks on how they're using ACRE supported observations and reanalyses to understand long-term Irish precipitation trends, the Irish droughts of the 19th and 20th centuries, and how weather played a role in the Easter Rising of April 1916. 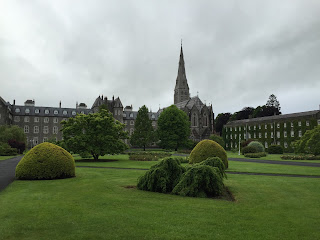 Other highlights included presentations on the following topics:


The benchmark of a good climate reanalysis is performing better than climatology, yet the uncertainty in a reanalysis is controlled by the amount of underlying observations assimilated into the analysis.  More observations correspond to a higher confidence in the analysis, whereas a data sparse region returns an analysis with low confidence.  For long-term reanalyses such as the 20CR and ERA-20C, the analysis in the 19th and early 20th centuries poses a challenge due to the overall scarcity of input data.  In particular, there is a great need for data in the Southern Hemisphere, not only for earlier periods, but for more recent years as well.  Philip Brohan's "Fog of Ignorance" visualizations have become a well-known highlight at ACRE meetings, and illustrate how ground-truth observations improve the certainty in historical climate reconstructions.

Antarctic weather 1909-10 from Philip Brohan illustrates the "Fog of Ignorance" in the 20th Century Reanalysis due to a lack of observations. Note the grey fog disappears in the vicinity of observations (marked by yellow dots) made available by ACRE facilitated data rescue.

ACRE is therefore making a strong push to recover historical data from south of the Equator, with efforts being led in regional chapters such as Chile, Southeast Asia, Southwest Pacific, and Antarctica, the latter of which is recovering observations from Antarctic whaling expeditions in the late 19th and early 20th centuries.

Learn more about ACRE at http://met-acre.net/.