NCEP Climate Forecast System Data: Some New Ways to Get a Subset

Note: This page was originally sourced from our Blogger page: http://ncarrda.blogspot.com/2015/07/ncep-climate-forecast-system-data-some.html

The Climate Forecast System Reanalysis (CFSR) was created by the National Centers for Environmental Prediction in 2010 by running their updated Climate Forecast System (CFSv2) retrospectively from January 1, 1979. CFSv2 continues to run operationally to produce NCEP's monthly and seasonal forecasts. You can read about the differences between reanalyses and operational model output here, and you can see a list of all of the reanalysis data hosted by the RDA from our home page, under the "Atmospheric Reanalysis Data" heading.

The high resolution (spatial and temporal) CFS model output data, which is now approaching 84 TB in volume for the almost 37-year period of record, has been heavily use by our community since we began archiving it in 2010, and particularly after we added the ability for users to request subsets of the data in 2011. At that time, users could select a spatial subset of the data by drawing a bounding box on a map and then only the gridpoints that fell within the box would be included in the output files. Also, the data could be made available in its native GRIB2 format or converted to netCDF. In response to requests from users,  we have recently added a couple of new ways to spatially subset the data, as well as an option to get the data in CSV format. That will be the focus of this post.


From any of the CFS dataset description pages, click the "Data Access" tab, and then "Get a Subset":

Make your date and parameter selections on the first page (which you can still modify later if you wish). Then on the second page, you will see the remaining selections that can be made, including output format and spatial subsetting: 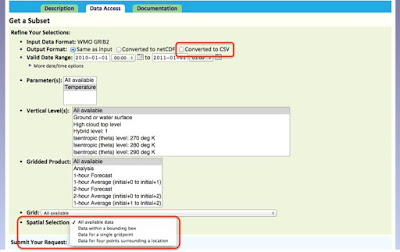 The highest horizontal resolution for the CFS data is 0.5 degree for the pressure-level parameters and 0.3 degree (before 2011) and 0.2 degree (after 2010) for the surface parameters. The minimum box size that can be drawn for the bounding box option is 1 degree by 1 degree, so that spatial selection is not well-suited for users looking for data at specific points on the globe. Both the "Data for a single gridpoint" and "Data for four points surrounding a location" options will allow you to select specific gridpoints. You will first need to choose one of the options from the "Grid" menu. Then once you have zoomed in far enough on the map, you will see markers for the gridpoints. For the single gridpoint option, simply click the gridpoint for which you want data and its icon will be circled and the coordinate boxes to the right of the map will be automatically populated (so that you don't need to determine the exact latitude and longitude of a gridpoint): 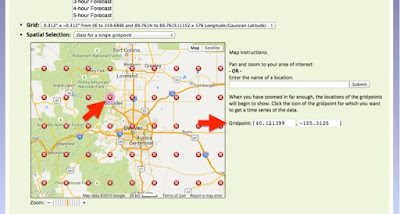 For the four points option (useful for interpolating to a non-gridpoint location), click a location on the map. A marker will appear where you click, and the immediately surrounding four gridpoints will be circled and the coordinate boxes to the right of the map will be automatically populated: 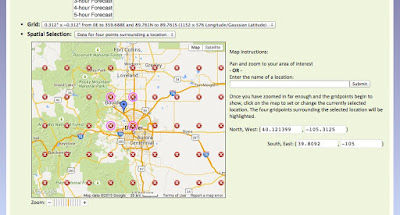 Finally, the option to get the data in CSV format is now available when all of the following conditions have been met for the request:

Unlike the other output format options, this option will yield a single data file containing all the data matching the request selections, which can be imported into Excel and other spreadsheet software. We hope to expand this option in the future to allow multiple parameters and/or vertical levels.